The third and final interview I have related to The Crystal Maze. Seeing as it's Christmas, it has to be quite a special one I'm incredibly proud to present an interview with original maze master Richard O'Brien. 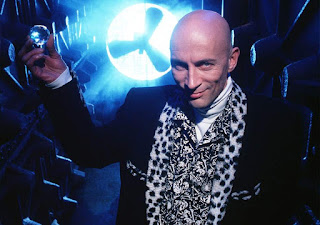 Richard is one of my heroes. Being a long time fan of both The Crystal Maze and The Rocky Horror Show. I never thought in a million years our paths will cross, but they have. I am incredibly lucky and never did I think when I started this blog earlier this year. Such a thing would happen.

But how did it happen? Well the whole idea of doing a series of Crystal Maze interviews never dawned on me after I interviewed David G. Croft. I thought that would be the only interview I'd ever get. With Richard being a native of New Zealand now and Ed Tudor-Pole known for being reluctant to talk about his time on the show.

But Richard was on my list of names of people I'd like to interview. I thought the idea of recording an overseas phone or skype call would be possible. So with the help of a friend, I acquired his agents details and sent off an email. I got a reply back within 48 hours. Richard was due to visit the UK later in the year I was told by his (incredibly helpful and polite. I have to say) agent and could I message back sooner to the time.

So about 3 months later, I emailed again. I explained who I was and what I was doing and that I am able to record a telephone conversation quite easily. The email response I got back, knocked me back and I had to re-read it a number of times to take it in. Richard had asked his agent to ask me if I'd like to do it IN PERSON at his hotel in London when he was back in the country for a few weeks.

I pretty much agreed to do it before even asking if I could have the time off work (I run this blog as a hobby). So three weeks later, I set off to London incredibly early in the morning. I arrived about two hours before the interview was due to take place. So I sat in a Wetherspoons and had breakfast while writing what I was going to ask him. I figured it would be nice to chat about his life and Rocky Horror as well as The Crystal Maze. I decided to write more questions about the latter as there are already several interviews with Richard purely about The Rocky Horror Show and very few about The Crystal Maze.

Half an hour before we're due to meet and the nerves start kicking in. I slowly walk to the hotel Richard was staying at. I turn up about ten minutes early, so stand outside a few minutes, pacing back and forth. I then enter the hotel. Just as I am asking the hotel receptionist for Richard. There he comes walking down the stairs. Smiling at everyone in the lobby. He walks straight past me (well he didn't know what I looked like) and begins looking around for me. I chase after him going "Richard! Richard!".

He turns around "Oh hello! Are you Jack?". "Yes I am" I respond. He shakes my hand and tells me to come upstairs and he takes me to a communal sitting room in the hotel. A very cosy one. Complete with big chairs and sofas. Old books on shelves and a big fire place. Richard tells me to make myself comfy. Asks if I want a drink and if I want the fire on. Being a bit lost for words that RICHARD O'BRIEN is bending over backwards for me. I respond "Erm.....tea please!".

Richard runs off and a few minutes later returns with a hotel staff member to put the fire on for us both. Before we start the interview we make the usual small talk. Richard had landed in the UK the previous day and was still tired and jet lagged (he is also, as of 2018, 76 years of age!).

Actually by complete coincidence. Just before I arrived at the hotel. I walked past a chocolate shop which has a Rocky Horror inspired advert in the window (Halloween was coming up). 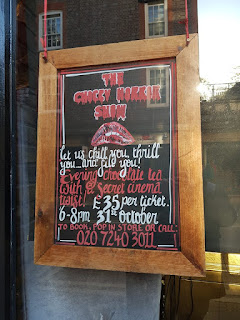 I decided to take a photo to show Richard. Which I did. He smiled and said his daughter had seen a similar thing in Brighton. A chocolate shop with chocolate statues of all the Rocky Horror characters!

Richard explained he was in the UK for a theatre play. Whether it was to be in it, or be a part in the production. He didn't say. I don't think he even said which play come to think of it and that there'd been a bit of a mix up and a theatre hadn't even been booked!

So I'm setting up my recording device (a Tascam which I had bought especially for this) and decide to set my mobile phone to record too. Just as a back up. I start my phone recording and Richard responds "Oh, I don't like that". I ask him what he meant. He didn't like seeing the recording timer on my phone counting up. "When you get to my age, you don't want to see time passing like that". A fair point. So I turn the phones screen off.

So I start recording and we start chatting. About 10 minutes in to the chat. A staff member appears with the tea I had asked for and sets it on the table. Richard asks if I'd like to pause so I could drink it and remarks "Oh, how lovely, they've event brought you a little cake!".

So after a few quick sips of tea. I start recording again. In fact, I recorded this chat in three blocks. Just in case any part were to screw up in the recording process. I'd rather part of it be screwed than the whole thing. We must have chatted for well over an hour.

Once we'd finished. I asked Richard if he wouldn't mind signing some things for me. Which he happily agreed too. I had brought with me. An original Crystal Maze book called Crystal Maze Challenge. He signed that for me. As he was signing the book he looked at the photos of himself on the Crystal Maze set and said to me "You know, I was 50 when I did that! I could still run faster than the contestants!" We also had a photo together. Admittedly I'm not a great selfie taker. 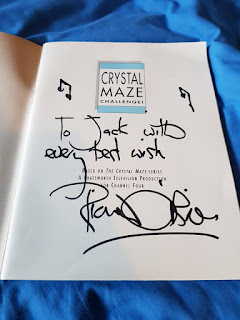 After that. He left a tip for the staff member who brought the tea. Going through a handful of coins, he remarks to me "What coins that? Is it tuppence? They've changed the design!".

After that, he kisses the back of my hand and we say goodbye to each other and with that he was gone. Very quickly, some hotel guests appeared wanting to use the seating area we had been sat at. So I very hurriedly packed my things and left. Checking my bag constantly that my Tascam was definitely in there.

I actually almost went straight home. Apart from popping in to a Forbidden Planet store. Where I spent a good 10 minutes walking around. Not even taking in what I'm looking at as it hits me that I've just interviewed a living legend. Responsible for writing one of the most successful musicals in the world and presenting a cult game show which has remained a favourite for almost 30 years. After that, I headed home.

So what was Richard like in person? They often say "Never meet your heroes, you'll be disappointed". In this case, that is so far from the truth. Richard comes across as nothing but charming. He didn't have to make that much time for me. Especially with the severe jet lag he was probably going through at the time. But he did. Despite being someone who had enjoyed some big successes in his life and is regarded as something of a national treasure. None of that has gone to his head and he comes across as very humble and told me a few times he's incredibly lucky to be where he is. I didn't see the Richard O'Brien known for his flamboyance and extrovert nature that day. I saw a different side to him. A quiet, shy and gentle man. Who reflected with great nostalgia and a warm smile. His life and extraordinary career which he felt he'd just stumbled in to.

It's a day I'll never forget.

Thank you Richard and thank you to his agent Helen too! 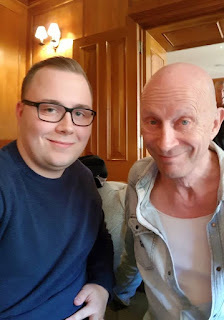 For me, this wins the internet this year. I thought it was going to be the Uncharted fan film with Nathan Fillion taking top spot but you've just snuck this in at the end of the year to win.